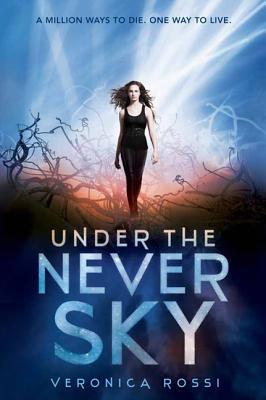 In a world of danger

Under the Never Sky has sold into twenty-six countries and been optioned for film by Warner Bros. Don’t miss the stunning book trailer directed by Roman White, available on the HarperTeen YouTube channel.

I don’t know how will to put my
reactions in to words. Honestly at first I don’t get it, I tried reading it
first then I don’t get what the Realms and the other places, I tried the second
time and it’s not clear either. My imagination is not working maybe? I thought
I will just give up and read other books, but still I tried to read it the
third time because I am really fascinated by color of it’s cover and I really
want to know what is in “Under the Never Sky” and miraculously! I get it. Soon
as I started understanding who Aria is, her Smarteye and Perry and everyone I’m
instantly curious on what’s more. It is Sci-Fi, YA and it is really
interesting, I started to picture out the worlds they are saying and the
people. For me it captured my attention and I want to dig in to the book to
know about their search for Aria’s mother and Perry’s niece. The story is
intriguing.

Another interesting part is how
Aria and Perry met, coincidence? Maybe but their worlds collide in unexpected
way. Their story is lovely, complete strangers or maybe enemies to allies to
lovers. I love them both. Aria is a Dweller, she lives in a world where
everything is artificial or should I say unreal? She and her people don’t
experience natural emotions like, fear. Their world is run by science. Many
things are just programmed. Perry’s world is the complete opposite. In his
world, you’ll feel everything even pain, love and fear. Everything is normal.
And when Aria went to Perry’s world, everything changes.
I had so many questions when I
tried to read the book twice. It starts with who’s Aria? What’s with her
Smarteye? Who’s this Perry? Simple questions with broad answers behind their
names are secrets. It’s not just Aria and Perry that got my attention, there’s
this boy named Cinder. He’s really powerful and I don’t know what’s in to him.
I want to know more about these characters even Roar.
I love their adventure! It is
interesting and fun though scary sometimes because of their enemies. Under the
Never Sky is full of secrets. You have to read to know more about the book
because the interesting parts are somewhere in the middle. It’s not something
that is there already.
I’m just sad a bit coz I finished
it after five days which I can do for two days only or one. I read the twenty
five percent of it first then I got so busy during the next days and I just
finished it last Friday. I read it the whole day and finished it at night. That’s
an achievement though but it took me so long because of my work. Oh well.. I’m
ready for the next book Through the Ever Night.
It is such a great book and I
enjoyed it personally, I love the Sci-Fi side of it, oh no I love every part!
By the way, I keep imagining Aria’s voice while singing I hope there’s a video
of it or something. I just I want to hear her sing to make it more alive.

Veronica Rossi’s debut novel, UNDER THE NEVER SKY, will be published in over twenty-five international markets, starting on January 3rd 2012 in the United States. Film rights to the trilogy have been optioned by Warner Bros.