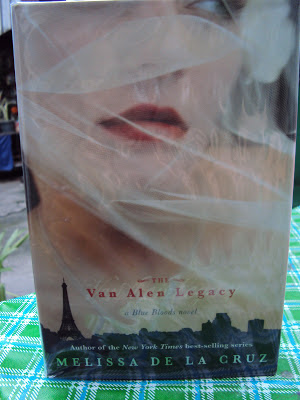 With the stunning revelation surrounding Bliss’s true identity comes the growing threat of the sinister Silver Bloods. Once left to live the glamorous life in New York City, the Blue Bloods now find themselves in an epic battle for survival. Not to worry, love is still in the air for the young vampires of the Upper East Side. Or is it? Jack and Schuyler are over. Oliver’s brokenhearted. And only the cunning Mimi seems to be happily engaged.

The book is fine for me, it is interesting and the love triangle of Schuyler, Oliver and Jack has finally ended. Well like other people say, you have to sacrifice for the one you love and that’s what they did also with Bliss she did something to free from the possession of his father. Finally, everything is in place or is it really?
But seriously, if I’m going to choose between Oliver and Jack for Schuyler, I’ll choose Jack for he can protect her because he’s so powerful yet it has a conflict but if she choose Oliver there will be a conflict too but Oliver can’t rescue her he is human although he’s been there ever since Schuyler was born. For me Jack is awesome and elegant and perfect for Schuyler. And well I love Schuyler too she’s a simple woman who loves Jack so bad even if she denies it so many times. She’s powerful too and I wonder what can she do more?
At this book nothing is complicated except for the search of Mimi’s team, the venators, to Pistis Sophia, I myself got confused and I tried to solve to puzzle together with them. And it is good to have a twist in the story. I wanna move on to the other book because of this I wanna know what will happen next.
Mimi’s another thing I kinda hate her but I pity her for being alone. She’s a kind woman but there’s something in her that I don’t like maybe she’s too proud at herself. So that’s the thing.
Exciting story it has full of sacrifices for the one they love and for their friends and other people yet it also includes pain and people are left behind. But the unknown happiness will start here. This is a great read and a must try!