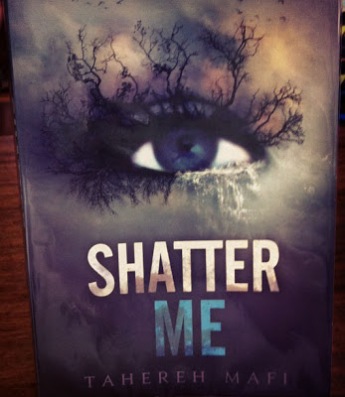 No one knows why
Juliette’s touch is fatal, but The Reestablishment has plans for her.
Plans to use her as a weapon. But Juliette has plans of her own. After a
lifetime without freedom, she’s finally discovering a strength to fight
back for the very first time—and to find a future with the one boy she
thought she’d lost forever.

The first time I saw this book, it didn’t catch my eye because of the cover honestly at first I thought it was a horror book because the girl was wearing a white dress. Then this edition comes and I said “wow! this is awesome!” then I began reading the description of the book and yet I still didn’t buy it because I don’t have my allowance.

Then I heard the author is coming to the Philippines! and I began to panic I want to buy the books, Shatter Me and Unravel Me. I really want to meet an author. I want to meet Tahereh Mafi! then the day comes March 2, 2013. She went here and I bought her books and let it signed. I’m so happy!

So that’s the story before I began reading Shatter Me, enough with that. Let’s focus on my review now.

Shatter Me… the story was great! I’m always curious about Juliette’s ability and that was it! Just in her touch people can die. Imagine if that’s real? so much isolation, well Juliette suffered so much and I feel sorry for her but then, this guy named Adam came and he can touch her! Imagine? for so many years of being alone there’s one man who cares for you and can touch you? so much relief! at least there’s someone who can touch her.

I love the story of it, the twists are amazing! Well I still don’t know how come Adam is able to touch Juliette let me find out on Unravel Me. But all in all I can say it was really great, my boyfriend said Juliette was like Rogue of X-Men she can absorb one’s energy until he/she dies. I don’t know if about Rogue is true I already forgot. I love Juliette! I can imagine her as a very pretty woman who doesn’t even know how strong her ability is and she’s really kind. I love her character because she is a fighter, no matter what happened to her during the isolation days, she’s still strong enough and she’s full of hope.

Honestly, I don’t know why people like Warner but then as I’ve said a while ago let me find that out too on Unravel Me. For now, I hate him because he’s using Juliette for some kind of evil powers. He also punished Adam. And I like Adam because he helped Juliette. He helped in everything, even if he knows that his life is in danger. I wonder if he has a power too…

I enjoyed the book! It was really good and I’m ready for Unravel Me now… I’m waiting for revelations because book one (Shatter Me) gave me so many confusing scenes. I’m really excited! By the way when I was reading the book, I felt sad when it is night time already because, I need to put the book down and sleep! then early in the morning that’s the first thing I will do before eating my breakfast! Read first!

I’m happy with the book it’s a great read! 🙂

Lemme share my signed book of Shatter Me. Here it is.. 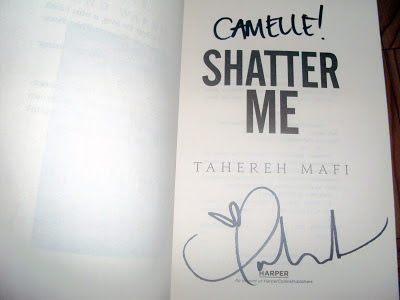 Thank you so much Tahereh Mafi! 🙂

2 thoughts on “Book Review: Shatter Me by Tahereh Mafi”