Some people ARE illegal.

Both of these statements are false.

Manuela
Azul has been crammed into an existence that feels too small for her.
As an undocumented immigrant who’s on the run from her father’s
Argentine crime-family, Manu is confined to a small apartment and a
small life in Miami, Florida.

Until Manu’s protective bubble is shattered.

Her
surrogate grandmother is attacked, lifelong lies are exposed, and her
mother is arrested by ICE. Without a home, without answers, and finally
without shackles, Manu investigates the only clue she has about her
past–a mysterious “Z” emblem—which leads her to a secret world buried
within our own. A world connected to her dead father and his criminal
past. A world straight out of Argentine folklore, where the seventh
consecutive daughter is born a bruja and the seventh consecutive son is a
lobizón, a werewolf. A world where her unusual eyes allow her to
belong.

As Manu uncovers her own story and traces her real
heritage all the way back to a cursed city in Argentina, she learns it’s
not just her U.S. residency that’s illegal. . . .it’s her entire existence.

Disclaimer: I received a copy of this book in exchange of an honest review. No payments made between me and the publisher.
I’ve been eyeing this book since I saw it on Twitter and I am surprised to get an advanced copy. I am so thankful for this. I am so thankful for the extra free time due to quarantine. In all honesty, I am not much of a fan of werewolves stories because the previous books I’ve read didn’t catch my attention that much – first impressions right? Anyway, this book is really different! It has this charisma where you just want to read it. I love the book cover as well, it is attracting and the illustration is really awesome.

Lobizona, it started with a very interesting chapter. It got me hooked easily and it was honestly hard to put down the book. All I wanted is to turn the pages until I get to know all the mysteries hiding from the story. How will the character discover her true self? What would be her reaction? What is her future? Things like those are in my head until I was able to discover the answers in the book. I liked how the story were made, the twists of the story was shocking especially that one near the end. I didn’t expect that turn.

Manu is the main character in this story and she only wanted to live normally. She’s been hiding all her life with her Ma and all she wanted is to become a citizen so she won’t be discriminated and no more hiding from the authorities. But, her life changed in an instant when she discovered some of the things about her life, her true nature and soon her future. There are other interesting characters as you go along, Catalina, Saysa and Tiago are some of Manu’s close friends who helped her discover herself. Every character are interesting and the power they poses is something else. They might not know their full capacity yet but it does sound like promising and amazing. Also, isn’t it cool that they have a school for werewolves, witches and other creatures? I seriously can’t wait for everyone to fully discover their true nature especially Manu she recently discovered hers and I’m curious what else can she do. How powerful can she be?

“Our trust in each other is the only thing they can’t take from us.”
Before I end this, I do suggest that this book is really worth reading. I’m excited for the next one and the book twist is really something I didn’t expect. I have a feeling that Book 2 will be more exciting! Also, more Tiago and Manu story. 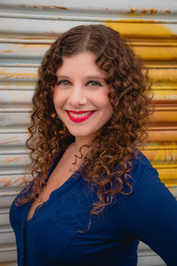 Romina Garber is a NYT/International Bestselling YA author who also writes under pen name
Romina Russell. Born in Buenos Aires and raised in Miami, Romina currently resides in Los Angeles but would much rather be at Hogwarts. As a teen, Romina landed her first writing gig—“College She Wrote,” a weekly Sunday column for the Miami Herald that was later picked up for national syndication—and she hasn’t stopped writing since. She is a graduate of Harvard College and a Virgo to the core. For more information about her books, follow her on Twitter/Instagram: @rominagarber.