Shadowland is a book about stretching your imagination into another universe that’s here on our own planet. There are creatures that live among the world’s population, without detection. What happens when ordinary people come face to face with them?

In the 1990s, a dark discovery was made deep in the shadows below Raymond and Sandy Watson’s quaint little home in Cleveland, Ohio. Ray and his band of cohorts; he was not sure if they all qualify as friends; delve deep into the Shadowland to discover its secrets. In the process of pursuing the mysteries below Ray’s rec room, they battle with issues of greed, friendship, loyalty and love while trying to outsmart and outrun death. Some are winners. F.L.I.C.K.E.R. Some are losers.

Wanting more from Shadowland than they initially obtain, Ray’s group enlists the help not of hired mercenaries, but a team of experts from E.F.F., Environment First and Foremost, and archaeologists from the Cleveland Natural History Museum. Everyone was searching for treasure but for very different reasons, some for the historical perspective of finding ancient artifacts and others, like Ray, for the pure power of the riches. Team leaders Laura Hatch and Bernie Edelman command the excavation with volunteers from the museum led by the minuscule Dr. A. E. Slattery and a team of Cleveland State University archaeology students led by the tall beanpole Professor Engstrom. What they find does include a long list of archaeological treasures, but also death and darkness in Shadowland.

The group’s journey into the world of science fiction reveals a secret world that they try hard to understand. They must work together to preserve not only their own lives, but perhaps the fate of the world. In the present day, does Shadowland still exist in the depths of the earth?

Ray stood transfixed, inside a ring of fire. He was looking up at a giant statue. In all his childhood nightmares, in all the fire and brimstone preaching he had endured as a child, in all of his adult life, he had never imagined the ugliness that towered above him. The stone creature was gigantic…forty, fifty feet, maybe more in height. The feet of the beast were cloven. The body nude and muscular. The face was frozen into a sneering smile. Long flowing tangled locks adorned the head, crowned by what looked to be horns from the ground level. The statue seemed to stare down on this mere human with an arrogant air, despising the puny surface creature at its feet. Ray had trouble focusing on the statue, with the fires surrounding the stone Goliath flaring to new heights. Ray had to squint to get a better look at the face. Wait!!! What was that flash? Ray tried to lock out the devilish dancing flames from his view. He tried to ignore the demonic shadows that darted about, just out of reach and conscientiousness. He tried to concentrate on the face staring down in disdain. “There it goes again,” he said out loud. The right eye of the beamouth gleamed when the flames hit just right… not gleamed, sparkled. The right eye sparkled like a diamond. 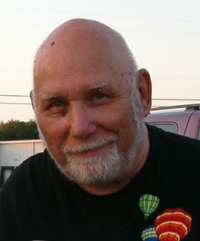 Robert B. McKnight has had a long and varied life.

Bob is a 1958 graduate of The College of Wooster with courses at Case Western Reserve University and Illinois University. He served in the U. S. Air Force as a recreation specialist and combat defense air policeman. He was stationed in Texas, Montana, Illinois and as far as Reykjavík, Iceland.

He has written articles for magazines, written humorous greeting cards for American Greetings, designed a brochure and catalog for an industrial sales company, sold advertising and written for The Cleveland Press newspaper. Most recently he has written, produced and directed commercials for an ad agency including one that was Emmy-nominated.

To round out the various types of employments, he has also spent some time bottling produce in a factory, driving a tour bus and selling appliances .

In the theatrical world, Bob started out by winning a play-writing award in college. He has now directed over 100 plays and shows and written five produced plays and musicals. He was the director of the Willoughby South High School drama department for several years.

Bob is a sports enthusiast that currently lives in Ohio with his wife Carole not far from daughter Michelle’s family of five and son Douglas’ family of three. He coached softball for 14 years and basketball for 4 years in youth league. He enthusiastically follows all Cleveland sports teams, plus Ohio State football.