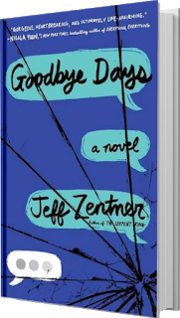 What if you could spend one last day with someone you lost?

One day Carver Briggs had it all—three best friends, a supportive family, and a reputation as a talented writer at his high school, Nashville Academy for the Arts.
The next day he lost it all when he sent a simple text to his friend Mars, right before Mars, Eli, and Blake were killed in a car crash.
Now Carver can’t stop blaming himself for the accident, and he’s not the only one. Eli’s twin sister is trying to freeze him out of school with her death-ray stare. And Mars’s father, a powerful judge, is pressuring the district attorney to open a criminal investigation into Carver’s actions.
Luckily, Carver has some unexpected allies: Eli’s girlfriend, the only person to stand by him at school; Dr. Mendez, his new therapist; and Blake’s grandmother, who asks Carver to spend a Goodbye Day with her to share their memories and say a proper goodbye to his friend.
Soon the other families are asking for a Goodbye Day with Carver, but he’s unsure of their motives. Will they all be able to make peace with their losses, or will these Goodbye Days bring Carver one step closer to a complete breakdown or—even worse—prison?

This is the first Jeff Zentner book that I’ve read and I already fell in love with it the moment I started the first few pages. The book put me in a slight depression state but I still decided to continue reading it because I badly want to know what will happen in the end. This kind of book affects me for some other reason but I still want to read because I learn from it, at least somehow I know what to do. Books like this can be a channel to some readers to become better.

Accidents happen all the time, anywhere and we didn’t know how. For Carver Briggs, he’s supposed to meet his best friends but they were killed in a car crash right after he sent one of them a text message. Carver never stopped blaming his self from what happened until he was forced by his sister to get help. That’s where he met Dr. Mendez. Aside from that, Blake’s (one of his best friend) grandmother asked him to do a Goodbye Day to formally let go and share the memories they had with Blake. Despite the hesitations, he agreed. Soon after, the other families of his friends asked him the same thing. Carver was confused at first but this Goodbye Day had a big impact in his life, he agreed without knowing what will really happen.

“Let me tell you about the God I know. My God judges a whole life and a whole heart. He doesn’t judge us by our worst mistakes. And let me tell you something else. If God is someone who makes us walk a tightrope over the fires of hell, then I don’t care to sing his praises for eternity on some silver cloud. I’ll jump off the tightrope before I’ll do that.”

Goodbye Days gave me chills. It broke my heart, I cried, I had to stop reading for a few hours just because this hurts a lot especially when this one scene with Eli’s parents, it makes me think life was so unfair for this young child. But aside from that, let’s not forget Eli’s ex-girlfriend, Jesmyn who became Carver’s companion. I love Jesmyn and Carver’s side story. It makes the book more interesting to read. That balances the depressing parts because their partnership is full of possibilities.

I think this book is the second best I’ve read this year. I love it so much to the point where I will never get tired of reading it over and over again. The story was beautifully written and worth reading for. It touches the heart of the readers from different levels of emotions. I’m glad that I was able to read and finish this book.

Jeff Zentner lives in Nashville, Tennessee. He came to writing through music, starting his creative life as a guitarist and eventually becoming a songwriter. He’s released five albums and appeared on recordings with Iggy Pop, Nick Cave, Warren Ellis, Thurston Moore, Debbie Harry, Mark Lanegan, and Lydia Lunch, among others.
Now he writes novels for young adults. He became interested in writing for young adults after volunteering at the Tennessee Teen Rock Camp and Southern Girls Rock Camp. As a kid, his parents would take him to the library and drop him off, where he would read until closing time. He worked at various bookstores through high school and college.