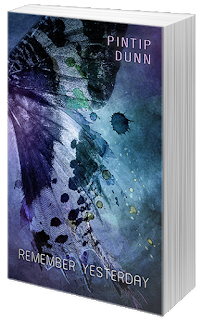 ** A sequel to the NYT Bestselling and RITA Award Winning Book, Forget Tomorrow **
Book Title: Remember Yesterday (Forget Tomorrow, #2)
Author:  Pintip
Dunn
Release Date: October 4, 2016
Genre: YA Sci Fi
Publisher: Entangled Teen
Purchase Links:
Amazon | Barnes & Noble | iBooks | Kobo | Amazon.co.uk | Amazon.ca | Entangled Publishing
Sixteen-year-old Jessa Stone is the most valuable citizen in
Eden City. Her psychic abilities could lead to significant scientific
discoveries, if only she’d let TechRA study her. But ten years ago, the
scientists kidnapped and experimented on her, leading to severe ramifications
for her sister, Callie. She’d much rather break into their labs and sabotage
their research—starting with Tanner Callahan, budding scientist and the boy she
loathes most at school.
The past isn’t what she assumed, though—and neither is
Tanner. He’s not the arrogant jerk she thought he was. And his research opens
the door to the possibility that Jessa can rectify a fatal mistake made ten
years earlier. She’ll do anything to change the past and save her sister—even
if it means teaming up with the enemy she swore to defeat.

— TOP TEN TIPS FOR ASPIRING WRITERS —
1. Read. The best way to learn about writing is reading, so read everything! Read your chosen genre, read other genres, read literary works, read commercial fiction. Just read!
2. Study. Unless you are a born story-teller (and some people are!), most aspiring authors can benefit from studying the craft of writing. So read as many craft books and take as many classes/workshops as you can. Here’s some suggestions to get you started: GMC, by Debra Dixon; Story, by Robert McKee; Save the Cat, by Blake Snyder; Michael Hauge’s Story Mastery; Laura Baker’s Story Magic; Margie Lawson’s psychologically based editing systems.
3. Find a critique partner or critique group. It may take a few tries to find a proper fit. Ideally, your critique partner or group will be at about the same skill level as you. You must respect each other’s writing, even if you don’t necessarily write in the same genre.
4. Be open to constructive criticism. You do not have to take every suggestion that is thrown at you. However, listen carefully and try to understand the root of the criticism. Sometimes, you may not agree with the solution, but the identification of the problem is still valid.
5. Surround yourself with people who genuinely support you. I’m not going to lie. It’s a tough industry, and there’s a lot of potential for heartbreak, as well as jealousy and competition. Spend time with people who will root for you sincerely and full-heartedly.
6. Attend a writing conference or workshop or retreat. This is a great way to learn about the business of writing, as well as make connections with other writers and industry professionals.
7. Enter a writing contest. This can be a great way to get your foot in the door. Some suggestions include online Twitter contests, such as Pitch Wars or #DVpit, or local RWA chapter contests.
8. Finish the book! Of course, none of this advice does you any good until you can finish a book. Sometimes, writers are tempted to revise infinitely. Don’t. Either finish that book and put it out there, or move on to a different project.
9. Put your work out there. This can mean putting it on submission to agents or editors, entering it in a contest, or self-publishing. This can be a scary step, as you are opening yourself up to rejection. However, if you want to be a published author, the most brilliant manuscript in the world won’t help you if it is languishing on your hard drive.
10. Last but certainly not least: persevere. The path to publication can be a long and hard road. But the biggest difference between an unpublished and published writer is that the published writer didn’t give up.

— OTHER BOOKS IN THE SERIES —

Imagine a world where your destiny has already been
decided…by your future self.
It’s Callie’s seventeenth birthday and, like
everyone else, she’s eagerly awaiting her vision―a memory sent back in time to
sculpt each citizen into the person they’re meant to be. A world-class swimmer.
A renowned scientist.
Or in Callie’s case, a criminal.
In her vision, she sees herself murdering her gifted
younger sister. Before she can process what it means, Callie is arrested and
placed in Limbo―a prison for those destined to break the law. With the help of
her childhood crush, Logan, a boy she hasn’t spoken to in five years, she
escapes the hellish prison.
But on the run from her future, as well as the
government, Callie sets in motion a chain of events that she hopes will change
her fate. If not, she must figure out how to protect her sister from the
biggest threat of all.
Callie herself.

One (1) winner will receive a limited, annotated hardcover of Forget
Tomorrow
a Rafflecopter giveaway

Pintip
Dunn is a New York Times bestselling author of YA fiction. She graduated from
Harvard University, magna cum laude, with an A.B. in English Literature and
Language. She received her J.D. at Yale Law School, where she was an editor of
the Yale Law Journel.
Pintip
is represented by literary agent Beth Miller of Writers House. Her debut novel,
Forget Tomorrow, won the RWA RITA® for Best First Book. Her other novels
include The Darkest Lie and the forthcoming Remember Yesterday.
She
lives with her husband and children in Maryland.
Author Website: http://www.pintipdunn.com
Author Twitter: http://www.twitter.com/PintipDunn
Author Facebook: https://www.facebook.com/AuthorPintipDunn
Author Goodreads: https://www.goodreads.com/author/show/13442212.Pintip_Dunn
Author Newsletter: https://madmimi.com/signups/163628/join
Author Instagram: https://www.instagram.com/pintip_dunn/