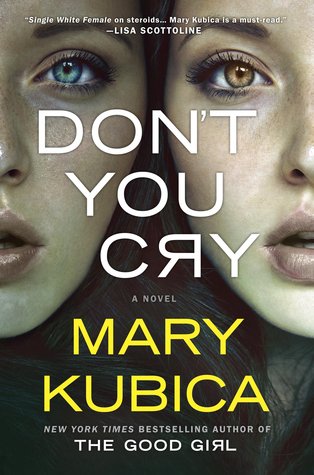 New York Times bestselling author of The Good Girl, Mary Kubica returns with an electrifying and addictive tale of deceit and obsession

In
downtown Chicago, a young woman named Esther Vaughan disappears from
her apartment without a trace. A haunting letter addressed to My Dearest
is found among her possessions, leaving her friend and roommate Quinn
Collins to wonder where Esther is and whether or not she’s the person
Quinn thought she knew.

Meanwhile, in a small Michigan harbor
town an hour outside Chicago, a mysterious woman appears in the quiet
coffee shop where eighteen-year-old Alex Gallo works as a dishwasher. He
is immediately drawn to her charm and beauty, but what starts as an
innocent crush quickly spirals into something far more dark and sinister
than he ever expected.

As Quinn searches for answers about
Esther, and Alex is drawn further under Pearl’s spell, master of
suspense Mary Kubica takes readers on a taut and twisted thrill ride
that builds to a stunning conclusion and shows that no matter how fast
and far we run, the past always catches up with us in the end.

I got the e-book copy via NetGalley in exchange of an honest review.
It was a challenge for me to read this book, I had a hard time to pick up the pace and read the book continuously. It’s not bad, if you are thinking negatively now, it’s just that reading thriller stories for me is under experiment and with this, I felt like the first part of the story was a bit sluggish but that doesn’t stop me from reading the book. I tried my best until I reach the climax and on that part onward, I felt the excitement. I didn’t think I’ll enjoy it that much and it will scare me for a bit. The twists and turns of the book is something to look forward to.
Esther Vaughan’s disappearance is one twist in the book that will leave you hanging. There could be lots of possibilities but she is a very secretive woman so it’s hard to think of a reason why she is suddenly missing in action. She doesn’t talk about her family and her closest friends are Quinn and Ben.
Quinn Collins is Esther’s room mate and best friend. When Esther disappeared she tried to track her down but what she found was something horrible. Quinn thought her room mate is the one responsible for the death of Esther’s former room mate Kelly. As she continue digging for answers in Esther’s disappearance, Quinn ended up in the old storage room where Esther hides her old things that contains the information about Esther’s family.
Alex Gallo is a teenage guy who lives with his dad. He’s a drunkard, so Alex is the one that is doing all the works for them to live. Alex is a good man who also run errands for a woman named Ingrid but he’s a curious type of man. One day he saw a girl in the beach who he called Pearl, since then he was attracted to her. They became friends but things changed when Alex discovered her darkest secret.

My overall reaction?
via GIPHY

Mary Kubica is the bestselling
author of THE GOOD GIRL (2014) and PRETTY BABY (2015). She holds a
Bachelor of Arts degree from Miami University in Oxford, Ohio, in
History and American Literature. Mary lives outside of Chicago with her
husband and two children and enjoys photography, gardening and caring
for the animals at a local shelter.