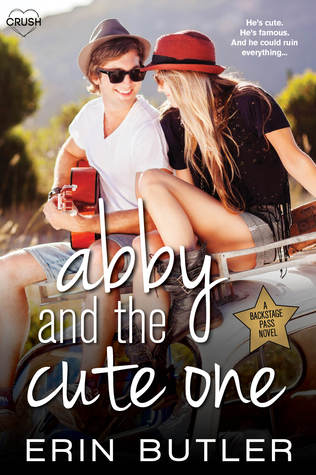 Title: Abby and the Cute One
Author: Erin Butler
Publisher: Entangled Teen
Published: November 16, 2015
He’s cute. He’s famous. And he could ruin everything…

Every
member of Seconds to Juliet has a girlfriend-except for Nathan Strong.
Now the band’s manager is leaning hard on “The Cute One” to play the
role of the band’s heartthrob. With the band’s sales in decline, it’s up
to Nathan to keep the fans’ fantasy alive.

The plan is to stage a
fake relationship and a fake breakup, and then let the fans fight to be
the one to mend Nathan’s broken heart. Just one problem. There’s
another girl in the picture-one Nathan can’t stay away from. In private,
Nathan’s stealing kisses with the band’s new opening act, Abby Curtis.

If
they’re caught, no one wins. Abby will be fired, and the band might not
recover the success they need to survive. But even with the pressure
mounting, Nathan and Abby can’t stop themselves from stealing one more
touch, one more kiss. And it’s only a matter of time before it all falls
apart.

This Entangled Teen Crush book is as forbidden as
the secret romance it contains! It has hot kisses, graphic language,
and extreme misbehaving. DO NOT GET CAUGHT WITH THIS BOOK…unless you
want everyone to know you believe in true love.

Before anything else, thank you for giving me a chance to be part of the tour and I am able to review this wonderful book. I haven’t read the other books yer I believe this is a series type of book? But this one is my first ever Erin Butler book that I’ve read. With so much honesty, I felt a bored in the first parts of the book, I suddenly felt like it was just the same story I’ve read before but as I continue reading, as I continue turning the digital page of this ebook, more and more I discover that I’m loving it. I am enjoying the book so much that I didn’t notice I reached 70% and so on. I end up finishing it in less than 24hrs. LOL

What makes the book interesting is that it involves a boyband and a lucky fan. — A-M-A-Z-I-N-G I do hope I’m the lucky woman fan for the 5 Seconds of Summer! — enough of my fangirling moment!!! Let’s go back to the Seconds to Juliet band, specially NATHAN. He’s charming, sweet and awesome kind of guy. I think if he really is real, I’m one of his fans. He met Abby accidentally and since then he didn’t look at the other girl anymore which is really awesome. ABBY is the kind of girl who’s willing to risk things just to get what she wants. I think it is a girl power. I like Abby!!! She likes Taylor Swift and purple! — I guess we’re alike? — okay enough. Nathan and Abby for me are perfect match, I like how the author wrote the story between them, I believe Abby’s dream is every fangirl’s dream.

“I chose you. And I’ll continue to choose you if you let me.”

Confession… when I was reading the book, I too was fangirling. Eeeepppp they’re just two lovely couple!!! Despite of everything happened between them they tried their best to be together and even though things get rough, for the sake of everyone’s career they gave way. For me it was awesome, they’re meant to be together!

What more can I say? entertaining, adorable and breathtaking kind of book. I recommend this to my blog readers who loves music and band. And readers who love swoony type of books! This one is really perfect. I’m looking forward to reading more books from Erin Butler! She’s an amazing author! 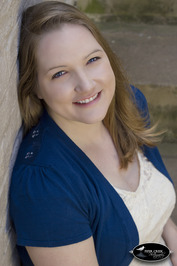 Erin Butler is lucky enough to
have two jobs she truly loves. As a librarian, she gets to work with
books all day long, and as an author, Erin uses her active imagination
to write the kinds of books she loves to read. Young Adult and New Adult
books are her favorites, but she especially fangirls over a sigh-worthy
romance.

She lives in Central New York with her very
understanding husband, a stepson, and doggie BFF, Maxie. Preferring to
spend her time indoors reading or writing, she’ll only willingly go
outside for chocolate and sunshine–in that order.

Erin is the
author of BOUND IN BLOOD, a YA paranormal novel, HOW WE LIVED, a
contemporary NA novel, and the YA contemporary romance titles, FINDING
MR. DARCY: HIGH SCHOOL EDITION and FALLING FOR SHAKESPEARE. Find out
more about her at www.erinbutlerbooks.com or @ErinButler on Twitter! You can also sign up for her newsletter here: http://eepurl.com/bylfx9