Relish Blurb
Release Date: January 12, 2015
I left Lunar Manor broken, seeking comfort in the hands of Laurel “the Dragon” Hardy, the editor-in-chief of the Daily Gossip. Okay, I may have used him to ease the pain He-Who-Shall-Not-Be-Named caused by his confession of loving someone else. On New Year’s Eve! Granted, he was drunk off his ass, but still! I stay with Larry mainly because the dreams are getting worse. Worse enough to wake me in the middle of the night needing the touch of another to save me from losing my mind.
Unfortunately, the handsome bassist of the uber successful indie rock band, Vicious, is never far from my mind. I thought I was rid of him once and for all only to have him show up at my hotel in London. Luka Visraya’s power over me is intense. No matter how far I run, I always end up circling back to him.
If you think my story is just some romance about two lovers getting back together, think again. Little did I know that returning to Luka meant I’d be plunging myself into a world more familiar than I ever thought possible. Trust me when I say I didn’t believe it either when the truth finally came out.
~Page 9~
“Easy for you to say,” I muttered.
“I heard that.”
I didn’t flinch at the admonition in Larry’s tone. He’d already been accepted to several of the top law schools in the country. He had his pick, so I found it hypocritical of him to tell me to let go when he poured over countless pro and con lists every night. I kept telling him to pick one already. Did he listen to me? About as much as I listened to him.
“Come on.” He waved me over to the table he’d set. “You get cranky and attack my lists when you’re hungry.”
Chagrined at being called out for speaking my mind, I pushed away from my desk and shuffled the couple of feet to the kitchen. “Aren’t you cold walking around without a robe on?” I pulled out a chair before he could pull it out for me and flopped down. I had a strip of bacon in my mouth by the time Larry replied.
“I’m taking one for the team.” He treated me to a half-smile. “I know how much you like staring at my ass…sets.”
I threw my bacon at him. It bounced off his chest to land on his lap. He picked it up and popped it into his mouth, still grinning. I chugged half my second cup of coffee when Larry’s next question caused me to swallow wrong.
“What?” I sputtered, swiping coffee off my chin.
He rolled his eyes at me. “Don’t pretend like you didn’t hear me.”
“I did hear you, hence the choking.” I pushed my half-eaten breakfast away. “You know this thing between us isn’t anything.”
For a second I thought I noticed hurt in his eyes before he blinked it away. “What does having dinner out once in a while have to do with what we have?”
~Next Page~ 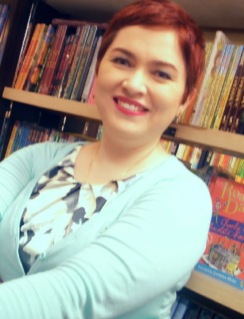 When Kate Evangelista was told she had a knack for writing stories, she did the next best thing: entered medical school. After realizing she wasn’t going to be the next Doogie Howser, M.D., Kate wandered into the Literature department and never looked back. Today, she is a graduate of De La Salle University – Manila with a Bachelor of Arts in Literature. She taught high school English for three years and was an essay consultant for two. Currently she writes full-time and is based in the Philippines.
Website | Twitter | Tumblr | Facebook
| Goodreads
| Pinterest | Instagram | Wattpad