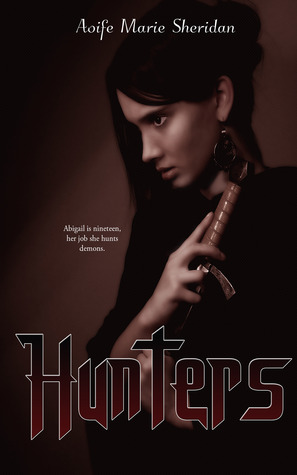 Abigail is nineteen, her job she hunts demons.
Her life so far has been tough, having witnessed her family’s death and her mother’s suicide she’s taken in by a priest, who believes her when she says she sees ghosts. Father Peter trains her as a demon hunter with three other members, one being Daniel, who isn’t what he seems.
But when a possession goes wrong, and ghosts start to attack Abigail, the tight rope she had on her emotions soon starts to loosen.
Abigail draws the unwanted attention of the Vatican, and she finds out a lot more then she was willing to learn.
Knowledge is power, but for Abigail it’s her undoing, and the only thing keeping her together is Daniel.
– EXCERPT –

INTERVIEW WITH AUTHOR AOIFE
MARIE SHERIDAN
Question: What have you published recently?
Recently I have
published Hunters. Demon Series Part one. It will be released on the 1st
of October.
Question: What is a typical day like for you as
a writer?
Well I work so I don’t
have a lot of time to write. My writing goes something like this. If I have a
spare moment – grab a pen, the house is empty – type. Quiet at work – get a
notepad, ect. Just any moment I can find to write, I will. J
But I never suffer with writer’s block, when I finally get to write I know
exactly what I want to say.
Question: What types of writing do you do?
Mostly
Paranormal/Fantasy but I would love to do a contemporary romance, maybe one
day.
Question: What are your favorite characters
that you have created? Tell us about them
I just love Cathy. She
is part of Abigail’s group. Her story and background are very sad but it gives
her a flair. Cathy can be nasty or overly self-confident but she does all this
to hide her insecurities her full story comes to light in Book Two (Hunted).
But she was fun to write.
Secondly of course is
Abigail. She was a very complex character to write. She’s an alcoholic so I had
to do a bit of research on this. Also her trauma of seeing her family die has
damaged her. She’s fuelled with anger, guilt and self-doubt constantly. We
don’t see Abigail in a happy light until we reach Book two (Hunted). We see a
more mellow side to her. Over all it was a challenge to write her, but I
enjoyed it.
Question: What music do you listen to, while
writing?
I have a playlist for
hunters. I listened to all these songs on repeat.
1. Another Love By Tom
Odell
2. Seven Nation Army
By White Stripes
3. Swedish House Mafia
(Club scene)
4.Watchtower Delvin
Feat – Ed Sheeran
5. Clown by Emeli
Sande
6.Runaway By Linkin
Park
7. In the End By
Linkin Park
8. Talk By Kodaline
Question:
What do you eat while writing?
I am not as bad as I use to be, so I don’t
really eat, (THAT IS WHILE WRITING) J normally my downfall is caffeine.
Five for Fun:
What is your favourite non-alcoholic
drink?  Coffee.
What is your favourite cartoon character? I
love the little girl from Despicable me.
What is your favourite movie of all time?
War of the Worlds.
What TV shows do you like to watch?  Games of Thrones.
What do you like to do for fun or just to
relax? Read, Watch movies or go out for meals.
Question: Where can we find you on the web?

Aoife Marie
Sheridan has loved reading from a very young age, starting off with mills and
boon’s books, given to by her grandmother her love for romances grew, by the
age of 14 she had read hundreds of them.
Aoife had a
passion for writing poetry or in her eyes her journal entries. It was something
she did throughout her teens and into her twenties. Aoife won first place for
two of her poems and had them published at a young age of just nineteen.
Realising she needed to get a real job (What writing isn’t) she studied
accountancy and qualified working in that field for many years, until her
passion for reading returned and she found Maria V Snyder. Poison study one of
her favourite books has been read and re-read countless times.
Aoife’s first
book Eden Forest (Part one of the Saskia Trilogy) came to be after a dream of a
man and woman on a black horse jumping through a wall of fire and the idea of
Saskia was born. Now with her first novel published and taking first place for
Eden Forest with Writers Got Talent 2013, Aoife continues to write tales of
fantasy and is currently working on her third book for the Saskia Trilogy
amongst other new works.
To contact Aoife
you can email her at aoifesheridan101@gmail.com
Website  | Facebook | Blog | Goodreads | Twitter | Google Plus | Linkedin | Pinterest