John Green’s The Fault in Our Stars meets Rainbow Rowell’s Eleanor & Park in this beautifully written, incredibly honest, and emotionally poignant novel. Cammie McGovern’s insightful young adult debut is a heartfelt and heartbreaking story about how we can all feel lost until we find someone who loves us because of our faults, not in spite of them.

Born with cerebral palsy, Amy can’t walk without a walker, talk without a voice box, or even fully control her facial expressions. Plagued by obsessive-compulsive disorder, Matthew is consumed with repeated thoughts, neurotic rituals, and crippling fear. Both in desperate need of someone to help them reach out to the world, Amy and Matthew are more alike than either ever realized.

When Amy decides to hire student aides to help her in her senior year at Coral Hills High School, these two teens are thrust into each other’s lives. As they begin to spend time with each other, what started as a blossoming friendship eventually grows into something neither expected.

Despite of Amy being sick and her bestfriend having an obsessive-compulsive disorder, they find each other very comforting. They have this relationship that just the two of them can understand. They tell each other everything, they have a very open relationship and there’s no secrets between them except one thing that may change their relationship.

I like the concept of the book, I enjoyed reading the book. The readers will be inspired when they tried reading this one. Personally I was inspired because Amy is such a brave and smart girl, I love her being a fighter and she is making decisions for herself, despite her disability. She doesn’t have much friends (like me I have a very little number of friends), but on her hired people, she found happiness. I like how she stands on her very controlling parents and made a choice on her own. The twist of the story is poignant, but what I love about it is that, it doesn’t turned out to be a bad one. I was afraid something might happen to Amy but she was so brave to face her own problem and Matthew (her bestfriend) was there. They faced the problem together. It is a good thing to have an awesome friend who can stand by your side no matter what happened right? Amy is so lucky to have Matthew and no matter what happened to their friendship through ups and downs they still remain friends.

This is a great read (I would read this again soon), a heartbreaking but inspirational book.

“Being friends with you made me feel like I could do more than I ever realized.”

PLEASE don’t worry about it.

He was worried about it. Very worried. Now that he’d told his mom about the job, though, he wasn’t sure if she’d let him back out.

“Wait a minute,” his mom said, after he told her he might be working as Amy’s aide one day a week. “Do I remember this girl? From sixth-grade chorus? Did she sit in a chair up front and sing louder than everyone else?”

“Yes,” he said, embarrassed by the memory.

“And she waved her hands the whole time, like she was conducting the audience?”

“Yes,” he said. This conversation made him think of a line Amy had written in one of her first emails to him. I want you to tell me when I’m doing stuff wrong. That request alone was enough to worry him: Where would he begin?

His mother clapped her hands and threw her head back, laughing like she hardly ever did anymore. “I loved that girl. I always wondered what ever happened to her.”

Okay. See you at school. I’m not scheduled to work until Friday, which pretty much confirms that your mom thinks of me as the least promising of your peer helpers. I’m fairly sure she isn’t saving the best for last. I think she’s hoping someone else will show up between now and then. If that doesn’t happen, I’ll see you on Friday, I guess…

Sorry to harp on this but why don’t you like sleepovers? 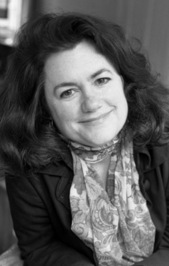 Cammie McGovern was a Stegner Fellow at Stanford and received the Nelson Algren Award in short fiction. Her work has been published in Redbook, Seventeen, Glimmer Train, TriQuarterly, and other publications.