Hi everyone!!! I want to thank you all for visiting my blog everyday and reading it. I thank you for following me and stuff. You guys are cool and I want to give away some things that might interest you. It’s my first ever blog anniversary so yeah! Happy Blogaversary. I had fun in one year though, crammed because of book tours and reviews and I was so busy and all that. Well so many things happened and I’m glad I didn’t give up blogging. It’s fun that I made new friends because of my blog. I met new authors and got my books signed.
I want to thank all of the publishers and authors who trusted me. Thank you for the books and ebooks you send, I got to read all of it and I’m happy to be part of being your reviewer. It’s fun! And THANK YOU SO MUCH for being my sponsor for this blog anniversary! I love you all.
And for my readers, thank you so much!!! You guys are awesome.
And because of that I have giveaways for you! My blog giveaway will run up to December 25th. Everyday I’ll post a rafflecopter for you to join.
My anniversary wish? Well… more readers and friends! 🙂
Here’s my first blog anniversary giveaway!!! Once again, thank you so much!

I am a retired telecommunications fiber-optic tech who now writes
for pleasure.  I love action, adventure, and romance in a novel.
Unexpected humor should be liberally sprinkled in too.  I do
strive to express the most extreme of human emotions in my
stories, whether love or hate, joy or sorrow.  I strive to take my
readers to where they cannot other wise go simply by the power of
my words.    Every time I see where someone has bought one of my
novels I am humbled to think that someone would spend their
hard-earned money to read one of my yarns.  I am very
approachable, self-taught by reading the works of accomplished
authors who’s work I like, and I am a work in progress.  In fact I
may soon change genres. 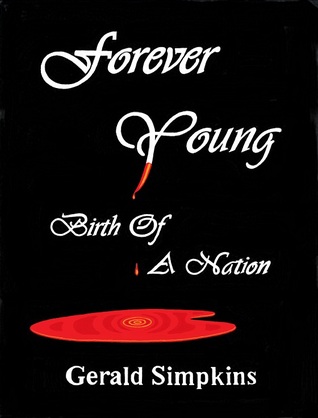 An Interview with Gerry Simpkins
1. Tell us something about your life as a writer.
I only write when the creative juices are flowing.  If I don’t feel it, I don’t start writing.  I may do some research about a future novel though.  I do read novels at times, but not those written in the vampire genre.

2. What’s the first book you read?
That is difficult to remember, but technically it would be a grammar school text book, a primer such as ‘Dick and Jane’.  The first fiction I remember reading was  Homer’s Iliad and Odyssey in the 4th grade.  I was an avid reader as a child, and in fact I loved the old Classic comic books which featured stories by American authors like Robert Louis Stevenson and others.  I grew up reading Jack London, James Fenimore Cooper, Edgar Allen Poe, Mark Twain, and other popular authors of the era.

3. What do you want in life other than being a writer?
I want to be the best husband and father I can be.  Aside from that I want to be financially secure, like most anybody else.

4. What was the hardest part of writing your book?
My three novels flowed easily with only one incident of writer’s block in each one.  Each time that only lasted a day or so.  In reality, learning to self-publish might have been the greatest challenge to getting my work out there in the world.  I knew nothing about how to use MIcrosoft Word or really anything else about electronic publishing.  A fellow writer helped me a lot to get over the bumps and hurdles.

5. What are you working on at the moment?
I am working on a technical problem with getting Hebrew fonts correctly reproduced in my latest book, ‘Secrets of the Bible’.  I am considering writing one of two novels.  One would be classified as an action adventure romance with the lead character being a teen aged boy whose parents are murdered in the 1800’s out in Montana.  He pursues the killers to Portland where he gets shanghaied and winds up shipwrecked in Japan.  The other story would be a May-September action romance novel where a widower aged 45-50 with a violent past meets a young woman with a 4 year old son who is running from an abusive ex boyfriend who is a dangerous individual himself.  I have not decided on either one at this time.

6. Which actor/actress would you like to see playing the lead character from your most recent book.I really cannot say, being as I really don’t know the names of too many actresses or actors, especially those who are that young.  It is interesting that you ask that question.  I visualize my stories as screen plays and then I write to best describe each scene and its activities.  I think that is odd being as I know so little about actors and actresses and even their names.  Sometimes I will see an actor or actress on TV or in a movie and I will connect him or her to a character in one of my novels.

7. What are your thoughts on writing a book series?
Obviously I love writing a series being as my only novels so are are a part of a series.  I like that my main characters are established which allows me to concentrate on developing the new characters and on the villain or villains.  I especially like to contrast other characters with my original characters, especially the way they think and their desires.

I especially loved doing my 2nd novel, ‘Forever Young Birth Of A Nation’.  I love the period that the story was set in being that it is when America was only a group of British Colonies fighting for our independence.  It was great fun working some of our founding fathers into my story and I loved doing the research and by the way, it was a great historical refresher for me which was a bonus.  It took longer to write than my first one being as I had to be careful to remain historically accurate regarding events and dates and to have a plausible reason for each founder who was introduced into the story.  Research into their personalities was a part of it as much as customs and weapons of the day and the outcome of the different battles.  I recall that I included some 23 historical real life characters in this novel, and not all of them were founding fathers, but they did play a part in our war for independence.  That is a thing that I would continue to do in future novels in this series.

I originally planned to have the ‘Forever Young’ novels as a series of stories centered around the vampire Ian McCloud and his part in shaping events such as the Revolutionary War, French Revolution, the War of 1812, the westward expansion and exploration, the Civil War, World War I, Prohibition, World War II, and on into the present era.  That is still my goal if I continue writing in this genre.

My 3rd novel, ‘Forever Young Irina’ is not truly a sequential part of the series but instead is a sneak peek at some of the survivors of this vampire clan and their reaction to a teenaged girl becoming  a vampire.  Attracting younger readers was my goal when I wrote ‘Forever Young Irina. My desire should I continue to write in this genre is to continue the ‘Forever Young’ series by returning to the time of the French Revolution.  The next novel would be titled ‘Forever Young Reign of Terror’.

Another reason for my love of a series is that a character from an earlier novel can again show up unexpectedly.  That is always fun for me to figure out how to plausibly insert that person into the current story and what their involvement is.  This can be a lot of fun whether the character shows up unexpectedly to save the day or to seek revenge for an earlier defeat.

8. What is the most demeaning thing said about you as a writer?
I am not aware of anything demeaning having been said or printed about me.  I rarely visit any social web sites however, so there could be something there that I don’t know about.

9. How do you react to a bad review of one of your books?
I have not yet had a bad review.  I have had one bad rating that had no accompanying remark or criticism.  I ignored that in the view that it was someone tasting sour grapes for reasons unknown to me.  Similarly a good rating with no reason why means a lot less than it would with an accompanying remark why the person liked it.  Every writer will get one or more bad reviews.  We have to accept that as part of the process of being an author.  In other words, it comes with the territory.  We need to look objectively at bad reviews if they are truthful no matter if it hurts or not because that person’s feelings count too, no matter what they said.  In my view the only exception to that would be an unwarranted and fictional rant.  My best advice would be to learn and profit from a bad review if that is possible.  I may change my mind though after I get my first bad one!

10. Do you have anything specific that you want to say to your readers?

I am very approachable and I do truly strive to improve my craft always.  Re-reading my novels periodically is one way that I try to improve.  I recently re read my first novel for the 14th time and found some missing quotation marks.  Even an omitted quotation mark, awkward sentence, or a missing comma will make me submit a new and corrected document to my publishers Amazon and Smashwords.  It really bothers me to find even one technical mistake in one of my novels after it is published.  People deserve to have my very best if they buy my stories.  I want to hear from my readers in the worst way and I want to know what I can do to make their reading experience more enjoyable.