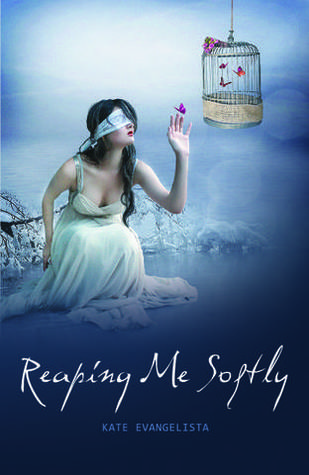 Ever since a
near-death-experience on the operating table, seventeen-year-old Arianne
Wilson can see dead people. Just as she’s learned to accept her
new-found talents, she discovers that the boy she’s had a crush on since
freshman year, Niko Clark, is a Reaper.

At last they have
something in common, but that doesn’t mean life is getting any easier.
All while facing merciless bullying from the most powerful girl in
school, Arianne’s world is turned upside down after Niko accidentally
reaps the soul of someone she loves. This sends them both into a spiral
that threatens to end Arianne’s life. But will Niko break his own
Reaper’s code to save her? And what would the consequences be if he did?

I want this book for so long, first of all it is because of the cover I’m curious and attracted to it. I really want to have a copy. I’m lucky to be one of the reviewer for this book, I saw the post in Goodreads back two weeks ago and Kate herself emailed me regarding to the copy! And here it is, I’m done reading and honestly, every part of my heart is broken and it was like my soul was reaped. I don’t know if it’s considered as a cruel ending, I just don’t know how to describe it.
This book is full of love and acceptance, I like how it flows from the very first time they met until the end (well sort of for the end). I don’t know if I like it because Arianne is a martyr or not. I just can’t take it. It’s cute but my heart shattered for Niko although he understands it and he promised to do everything for her, still it hurts. The truth is it almost made me cry. Just kidding I love the book, it’s just that.. it hurts — Stop for my drama it still hurts and I can’t move on, okay? — Back to my review, the book is beautiful. I hardly put the book down and when I do, I’ll grab it again! So many parts in there that makes me smile, I thought at first that this is creepy because Arianne can see ghosts, but it’s not (maybe in some parts but not at all). I got hooked in this book because it is really alluring.
Arianne is a wonderful girl who loves her sister Carrie so much. She’s cool and interesting woman. She gets bullied by Darla sometimes and she easily get over with it. She’s with her best friend Ben always. Ben is like a brother to her and Carrie calls him “fake boyfriend”. Arianne likes Niko ever since he showed up in her school. They happened to be be partners in one of their class and got to finally meet him and talk to him. Niko on the other hand, noticed Arianne right away. They’ve became friends and not for long, lovers. Niko is a cool guy, a bit creepy, but cool. He’s awesome in so many ways and he is madly in love with Arianne. He will do anything for her no matter what the cost. Their love for each other makes unnecessary actions that lead to something else which is danger.
Love can do everything no matter what it takes, that’s what I learned from this book. Never surrender is the other one. For me I will never get tired of re-reading this book, an easy read and it’s amusing. I want to read the next book, and I wanna know what will happen to Arianne and Niko. Seriously my reaction after reading? I stared at the book and re-read that last two pages and asked my big WHY? I really can’t believe it happened (until now).
I’m in love with this book and to the characters! Lovely book.
PS. I hope I’ll be able to see Kate Evangelista in person! (Christmas wish)

When Kate Evangelista was told she had a knack for writing stories, she did the next best thing: entered medical school. After realizing she wasn’t going to be the next Doogie Howser, M.D.,
Kate wandered into the Literature department of her university and
never looked back. Today, she is in possession of a piece of paper that
says to the world she owns a Literature degree. To make matters worse,
she took Master’s courses in creative writing. In the end, she realized
to be a writer, none of what she had mattered. What really mattered?
Writing. Plain and simple, honest to God, sitting in front of her
computer, writing. Today, she lives in the Philippines and writes
full-time.