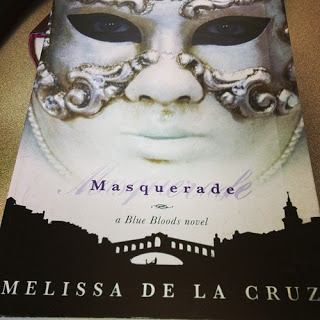 Schuyler Van Alen wants
an explanation for the mysterious deaths of young vampires. With her
best friend, Oliver, Schuyler travels to Italy in the hope of finding
the one man who can help-her grandfather. Meanwhile, back in New York,
preparations are feverishly underway for the Four Hundred Ball, an
exclusive gala hosted by the city’s wealthy, powerful, and unhuman-a
true Blue Blood affair. But it’s at the after-party, a masquerade ball
thrown by the cunning Mimi Force, that the real danger lurks. Hidden
behind the masks is a revelation that will forever change the course of a
young vampire’s destiny.

Rich with glamour, attitude, and
vampire lore, this second installment in the Blue Bloods saga will leave
readers thirsting for more.

I really love the Blue Bloods series and this book have so many secrets. They reveal some of the secrets here. This book is interesting for it is where everyone get alarmed of what is really happening in their world.

The second book never failed to tell me to read more! So I’m reading now the second book which is I’m so excited since last night. I love this book because it has history and somehow it include facts. Very detailed so it’s like I’m traveling to the other world.

If you haven’t read the book yet maybe this will be the right time to read it! It’s all about vampires and of course humans are there also but you’ll know the relationship they have. And another thing is the vampire lives are very interesting! You’ll know what are their powers specially Schuyler Van Alen in this book she started to increase things that she already know and she started to study more. It is interesting and you’ll find a revelation here. So, go to your nearest bookstore and grab one of the series.
I’m ready for the third one! next review will be posted soon!